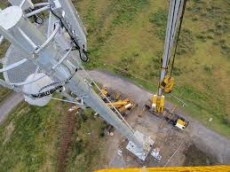 ‘Planning has also been finalised for a fixed wireless facility in Clothiers Creek with services forecast to be available in 2015″ said the spokesman. [page 8 Tweed Vally Weekly 19/2/15]

I attended the public meeting that was held in the Civic Centre in Murwillumbah on 27 February 2013. The simplest explanation given was that the tower delivers three 120 degree spread “footprints” which residents can access with an outdoor antenna, such as in the image below, which must be in line of sight to the tower.

It is written that the power delivered by the towers is low in comparison to mobile phone tower radiations, and received outside the dwellings.

Consideration should be given to whether you have family members that are electrically sensitive, as well as any social conversations with friends and colleagues who have personal negative experiences?

I did have a conversation at the meeting with one of the presenters who was in my age group of 50+. He was from Victoria, and lived in an area where he has bee hives. I asked of his experience with the bees, and he replied that where he lived was much more radiation intensive generally than this Tweed area, and that he encountered diverse threats that were other than electrical, such as chemicals and natural pests. He explained that bees do a dance in relation to the sun and the nectar source to communicate, not being magnetic. However, I am aware of other written material that disputes this?

Please feel free to comment on this general topic.

There has been a long and well-organised campaign to stop this NBN tower. Now construction has begun and is scheduled to be completed within three weeks. Not to be deterred, protesters have been able to hold up work for a few hours each morning by blocking access to the workers. From the photo, it looks like the symbolic portable toilet is also having trouble being off-loaded. This is one group who have obtained clinical blood tests. For more on this procedure, see below.

There is a rally to stop the tower at 9am on Monday 9 March and all are invited to attend and show their support. Directions from Murwillumbah, drive North on the Old Highway to the Condong Mill. Turn east, to the right at Clothiers Creek Road and drive to the top of the ridge. Turn right at the top into Hammond Drive. It is at a dangerous intersection with mirrors. If you start going downhill you have gone too far. The site is less than a kilometer along the ridge.

A before-and-after live blood analysis is possibly one way to substantiate if a person’s health has been compromised by a new tower. Here is how it works. http://www.mullumwifi.com/live_blood.pdf 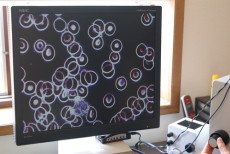 Exposure to EMR may cause blood cells to clump together and distort as shown above.