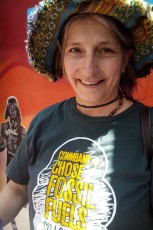 Banks in Lismore feel the heat of fossil fuel divestment
Media release 17th October 2014:
Lismore led the way towards a sustainable today with a gathering today of about 40 residents outside the Environment Centre at Spinks Park. Many went from there to cancel their accounts, telling banks in the town centre that they are not happy with the $20 Billion invested in fossil fuel projects since 2008.
Hundreds of Australian residents will switch banks on Friday and Saturday to take a stand against the Big Four bank’s financing of coal and gas expansion. They will take part in a National Day of Divestment action which will span 56 branches in 14 cities across Australia and is expected to see hundreds of millions of dollars’ worth of business moved from Westpac, the Commonwealth Bank, NAB and ANZ to financial institutions that do not finance fossil fuel projects.
Naomi Tarrant, spokesperson for the Lismore event said, ‘The Big Four banks play an essential role in supporting new fossil fuel projects like the Abbot Point port expansion. Switching banks is a great way to align your money to your morals and to send a powerful message that it is no longer socially acceptable to profit from the destruction of the planet.’
The event comes after a high profile public debate over moves by the Australian National University to divest from fossil fuel companies as part of a review of its socially responsible investment policy.
Since 2013, the Big Four banks have lost an estimated $200 million worth of business from customers joining the fossil fuel divestment movement. The campaign has won high profile support from celebrities including singer-songwriter Missy Higgins who posted a Facebook message, announcing her intention to leave ANZ if they don’t stop financing fossil fuels and Felix Riebl, lead singer of the Cat Empire who closed his ANZ accounts.
In recent months, the Australian fossil fuel divestment campaign has rapidly gained traction, with the past fortnight seeing divestment commitments from institutions including Local Government Super, the Perth Anglican Diocese, the Canberra Anglican Diocese, the Australian National University, Moreland City Council and Anglican National Super – the super provider for the Australian Anglican community.
Scott Sledge of Lillian Rock said “After 30 years with Westpac Bank, I’m closing my account and moving my business elsewhere. I’m doing this because I don’t want my money to play any role in the destruction of our planet. I owe this to my grandchildren.”
Tori Bail of Eden Creek said that she closed her Commonwealth accounts to support the human right to a clean energy future. “I will set up an information table at the Lismore Environment Centre every Friday to help other people understand how they can make a difference by changing banks,” she said.
Today’s action occurs the same day as 30 ‘Climate Warriors’ from the Pacific Islands joined 300 Australians to blockade the world’s largest coal port in Newcastle, drawing attention to the impacts of fossil fuel driven climate change on their countries. Their homes are threatened by rising sea levels due to carbon pollution caused by burning Australian coal and gas.
For media enquiries please contact: (Lismore) Naomi Tarrant 0423 927 415

This entry was posted in Uncategorized. Bookmark the permalink.